You are not connected. Please login or register

Just a suggestion but someone should make a history thread somewhere on this forum that explains the full history of this alliance (origins, war, diplomacy) it would really interest some members. I don't have the time for it but just wanted to throw that out there.
Guest

We should create that post here and finish the wiki page I started (I'm not good with that stuff).

I'd like to help the member that takes this job, I'm not good writing serious things in english.

I could write some stuff, just need the info really... 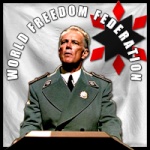 The World Freedom Federation; founded on Dec 03, 2007 by myself after finding a large alliance to be very ineffective for the individual nation. At the maximum point, we had about 7 fully active members. We had been at war with the Osirian Compact members since Dec 04, 2007, an unprovoked war. In late january, I lost the internet and the alliance went dormant. A few hours after soldier disbanded on 05/06/09 I joined the WFF AA and urged other soldiers to follow. The original WFF founders from v2.0 of the WFF is Nord Belka, Chazz, Poliz, Merdesa and NotYou. We have set a few goals for the WFF from its start including making sure every nations' needs are attended to, recovering lost Soldier members and superior activity/communications.

I lack wiki skills, I cant change the date on there for the date founded. Can an wiki capable person do this for me?

U missed the part where i joined , and we went from being good , to great

^^ you just added it

After finding many large alliances to be ineffective for the individual nation, Nord Belka founded The World Freedom Federation. Based upon the principals of catering to every nations needs, and freedom for each citizen.

In it's initial peak, The WFF had only seven fully active members, yet had been at war with the Osirian Compact --one that came unprovoked. Unfortunately two months later, communications were lost, and the alliance was left dormant.

For a year and a half The WFF had rested only to be awakened hours after Soldier disbanded. Nord, having dusted off his old Federation garb and medals, urged fellow Soldiers to follow. Promising them the ideals held by the original incarnation of The WFF, a small group of Soldier nations set forth. So with the help of Chazz, Poliz, Merdesa and NotYou; Nord had found himself leading The World Freedom Federation yet again. Still holding the beliefs he once had and that The WFF stood for, they set out recovering lost Soldier members and spreading the ideas of freedom, loyalty, and comradery.